Martha Rosler born in 1943, Brooklyn, New York, is an American artist. Famous for her
communicative art and as she says, “a form of an utterance, a way to open a conversation.” 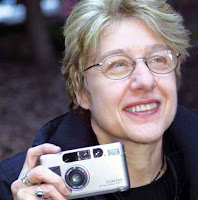 Rosler’s video, photography, installations, and performances are infamous for their political and social critique as well as their tongue-in-cheek humor. In the course of over 35 years, Rosler has produced works about the trauma following the Vietnam War, the destitution of her native New York City streets, feminism, social justice, and the separation of public and private life and their respective architectural spaces. Rosler also spent over a dozen years in Southern California between the late 1960s and the early ’80s, during which time she made some of her most famous works, including the photomontages Bringing the War Home (1967–72) and the performance film Semiotics of the Kitchen (1975). Rosler's work and writing have been widely influential and is centered on everyday life and the public sphere, often with an eye to women's experience. Recurrent concerns are the media and war, as well as architecture and the built environment, from housing and homelessness to places of passage and systems of transport.

Rosler conceived Bringing the War Home during a time of increased intervention in Vietnam by the United States military. Splicing together pictures of Vietnamese citizens maimed in the war, published in Life magazine, with images of the homes of affluent Americans culled from the pages of House Beautiful, Rosler made literal the description of the conflict as the "living-room war," so called in the USA because the news of ongoing carnage in Southeast Asia filtered into tranquil American homes through television reports. By urging viewers to reconsider the "here" and "there" of the world picture, these activist photomontages reveal the extent to which a collective experience of war is shaped by media images.


From the series House Beautiful: Bringing the War Home, in Vietnam