The establishment of the first women’s organization in Jordan goes back to the year 1944, when some women started the so called (Women’s Solidarity Society) with queen Misbah (The wife of King Abdullah (the first), and the mother of King Talal) as the honorary president. The so-called Women’s Solidarity Society focused on helping those in-need by providing financial aid.

Furthermore, the emergence of women’s action in other Arab countries has influenced women and women’s public work in Jordan. Huda Sha’rawi  (1879-1947) first women’s activist from Egypt, paid Jordan a visit in 1944. While meeting with King Abdullah (the first) she asked for his permission in establishing a women’s union branch in Jordan following along the footsteps of women in Egypt and many other Arab countries. The first “Women’s Union Society” was established directly hereafter (1945), and this time with princess Zain Al Sharaf as the active president. This society represented a slight difference from the first Women’s Solidarity Society. It had an office, so that members did not need to meet in houses, and it focused for the first time on fighting illiteracy among women. Apart from fighting illiteracy, the organization followed the same strategies (implemented by the Women’s Solidarity Society), such as offering help to the poor, the refugees, and orphans basing on charity concepts. Later in 1949, the two organizations merged and were then dissolved in the same year because of some conflicts between the members.

The arrival and integration of large numbers of Palestinians who had been active politically against the British Mandate in Palestine prior to 1948 has had a major impact on the history and development of civil society organizations and the women’s actions. The Arab-Israeli Wars have shifted the work of both Jordanian and Palestinian women to another sphere, whereby the focus (this time) was on dealing with the war outcomes, i.e. dealing with the refugees’ problems, and the Palestine question. Their work appeared as a voluntary, cohesive action. Moreover, while women’s activities on other fronts might have been suspect during this period, efforts aimed at addressing the Palestine problem were much more likely to be tolerated and thus served as a focal point around which women might rally to work. On the other hand, the preoccupation with external issue combined with the rivalries between various political groups led to an ignoring of social developments in Jordan itself. 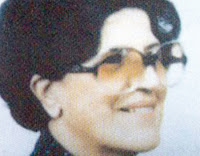 The establishment of the Arab Women Federation (AWF) on June 17, 1954 marked a qualitative change in the type of women’s organizations active in Jordan. As in other Arab countries, women were caught up in the ferment of the 1950s and were activly helping the disabled Palestinians, so that the entire atmosphere was one of political activity. Emily Bisharat, (the first female lawyer in Jordan) was elected president at a founding meeting held in Amman, which was attended by some 800 women.
The main goals of the AWF were; eliminating illiteracy, raising women’s socioeconomic level, and developing friendships between Arab women and women around the world in order to improve the situation at home. The degree of woman’s involvement in broader national issues was clear from the union’s slogan:
Equal rights and responsibilities, Liberating Palestine, and full Arab Unity.
Pubblicato da Fatima Abbadi a 06:07